Building up your finances isn't impossible, but it isn't easy in the beginning. Sometimes we are our own worst enemies when it comes to our money.

When you talk to those who have gotten out of deep debt or saved and invested for a dream, they'll mention that they had to make changes.

While those who made drastic changes get the headlines, you two can still reach your goals and achieve your dreams with smaller, more sustainable changes.

Changing Money Habits: Start with One 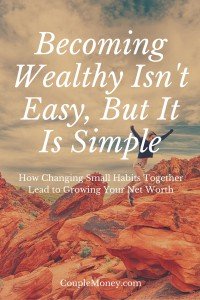 One of the biggest obstacles families have with their finances is breaking out of bad habits and patterns.

We tend to use the same bank simply because we've been with them for years.

Even though the banks has fees that could be easily avoided by simply moving our money, most don't do that.

I know, because we had to get burned before we switched banks. Change can be scary.

To counteract that fear, start with change one habit or one bill at a time.

Let's begin with cellphones – for couples and family, the bill can be significant.

Many of my friends have smartphones and use them constantly. They want to keep them and have a data plan that allows them to use them.

Can you really save with one small change?

Yes you can – if you're willing to look at the new options out there for cheap smartphone plans.

They are several out there now, but since I use Republic Wireless I'm going with them for this example.

Let's say a couple has 2 smartphones and a data plan where they currently pay $150/month with one of the major carriers.

Their contract is up and they have an option of either getting subsidized phones with their current provider or switching over to Republic Wireless. 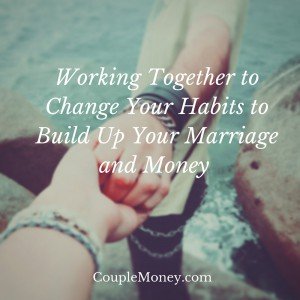 If they stayed with their carrier, they can upgrade their phones. They have to turn in their current ones and pay $25/month each for the new editions and stay with them for two years).

Their service plan will be about $85 for the two lines, sharing 3 GB for a total of $135/moth (taxes and fees not included).

Going with Republic Wireless means buying two phones out right, but they'll get cheaper prices on their monthly bill – $55/month. (As an added bonus, you get a refund on the data you don't use.)

Looking over a year here's an estimate of the monthly and total costs. I used Moto X as my comparable phone for Republic Wireless.

Over the two year contact if the couple stayed with the major carrier they'd pay a total of  $3,240. If they made to the switch to Republic wireless their total out of pocket would be $1,920 – a savings of $1,320!

Looking at the numbers you'd think people would leave their cell phone providers in droves to get a deal like this, but that's not the case.

There are myriads of reasons – some of them very valid, such as:

“I've never heard about the company, are they legit?”

Of course before you switch over a service or a buy a product from a new company it pays to double check their credentials.

There are resources out there (including this blog) where you can find out more about services from people who've used them.

“They don't have coverage in my area.”

Absolutely essential – if they don't have service in your area, you can use them.

Does that mena you just give up on switching?

No, you try to see if other providers, like StraightTalk, Boost, or Ting have service.

“They don't have a selection of phones I want.”

Republic Wireless relies on the Moto X, G, and E with their plans. They're all very capable and a good value.

Stuck on your iPhone? Again, look at other providers that allow you to bring over your device.

A reasonable concern and one where you can work around. Perhaps you can make the switch in a few months if you're expecting a tax refund. You can also again look at other providers to see if you can save using your current phones.

All of the objections have validity, but the bottom line is you two have to make some change if you want to save money.

That's just one example, but you can see how easy it is to rationalize and stay with the status quo.

Don't let fear of change and the unknown keep you living paycheck to paycheck.

Start today and change one habit or bill. Then next week pick another to tackle together.

Slowly, all those changes lead to big growth, not just with your money, but your marriage.

I shared just one example of how you can change your finances; I'd like to hear your story.

What has been the biggest change you two have made to your finances?